Field and Swan lakes are flooded many of the platforms are under water also banks are very slippery.

Asheldham lake will re-open from Monday 1st November but the bridge remains closed for repairs.

As a special early promotion for any one from the Billericay and District Angling Club, you can now come in store and claim a FREE 5kg BAG of Outlaw Pro golden breadcrumb ground bait. (No purchase required)
And don't forget, you can also claim your FREE Outlaw Pro Membership Card (Normally £10) when you present your BDAC membership card at the till. (You will get 10% Discount on all Outlaw Pro products and 5% off every other brand for 12 months)

As of 22nd June 2021 members requesting Guest Passes must give 72 hours notice. This change supercedes the 24 hours stated in the 21/22 club handbook and February 21 Newsletter

With 9 matches in the season, these matches are held at good venues and are very enjoyable, details of which will be shown on the fixture list in your 2021/22 handbook. Sadly in recent times the number of members attending these matches has dwindled and the Committee would like to advertise these events to all Female members to attend either at the Ladies Matches or with your Partner at the Mixed Pairs Matches.

To book a place at these Matches, details of which are all shown on the 2019/20 fixture list in your handbook, or for any queries please call Nick Mitchell on 07970 606558

At the end of February, 2020/21 members will receive a newsletter and renewal application form for the year commencing 1st April 2021. If any member has moved since last year, they should advise the Club as soon as possible by emailing bdacmembers@gmail.com with their new address.

I got a call Friday midday that the fish being supplied by the EA paid for from the rod licence money were on their way to Asheldham, There was around 1200 fish a mix of tench and crucians. 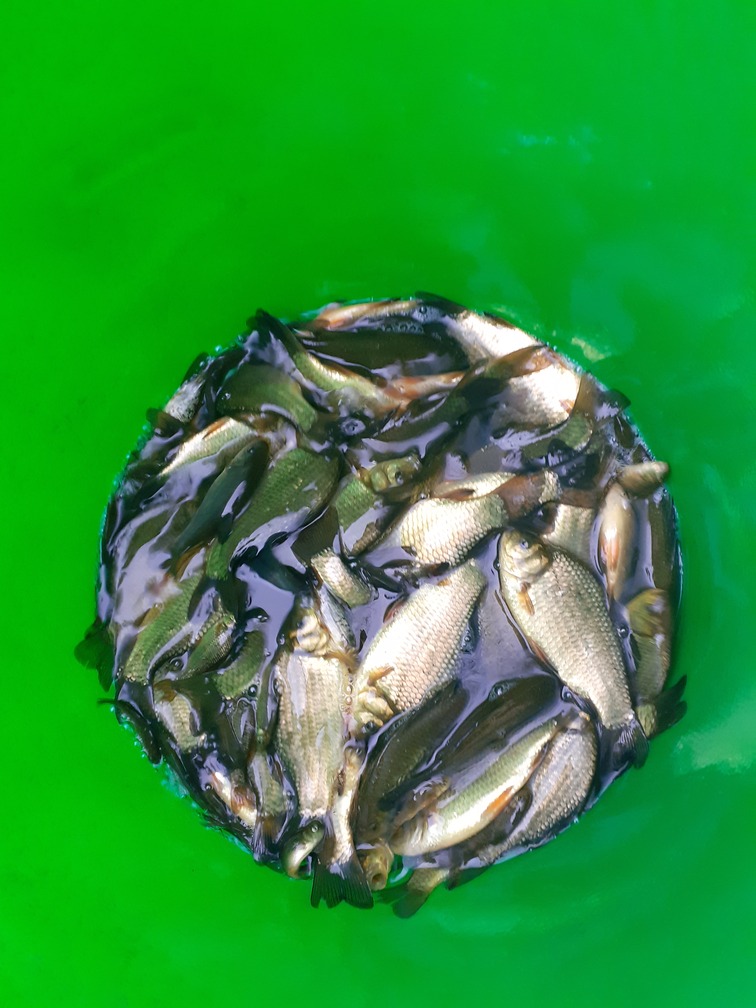 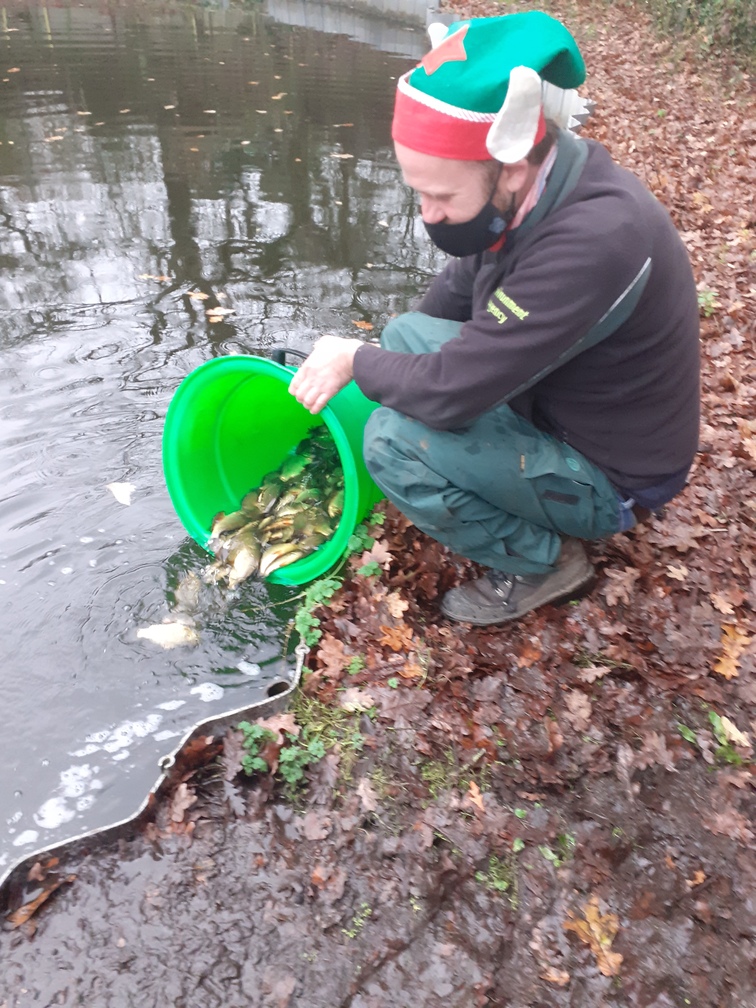 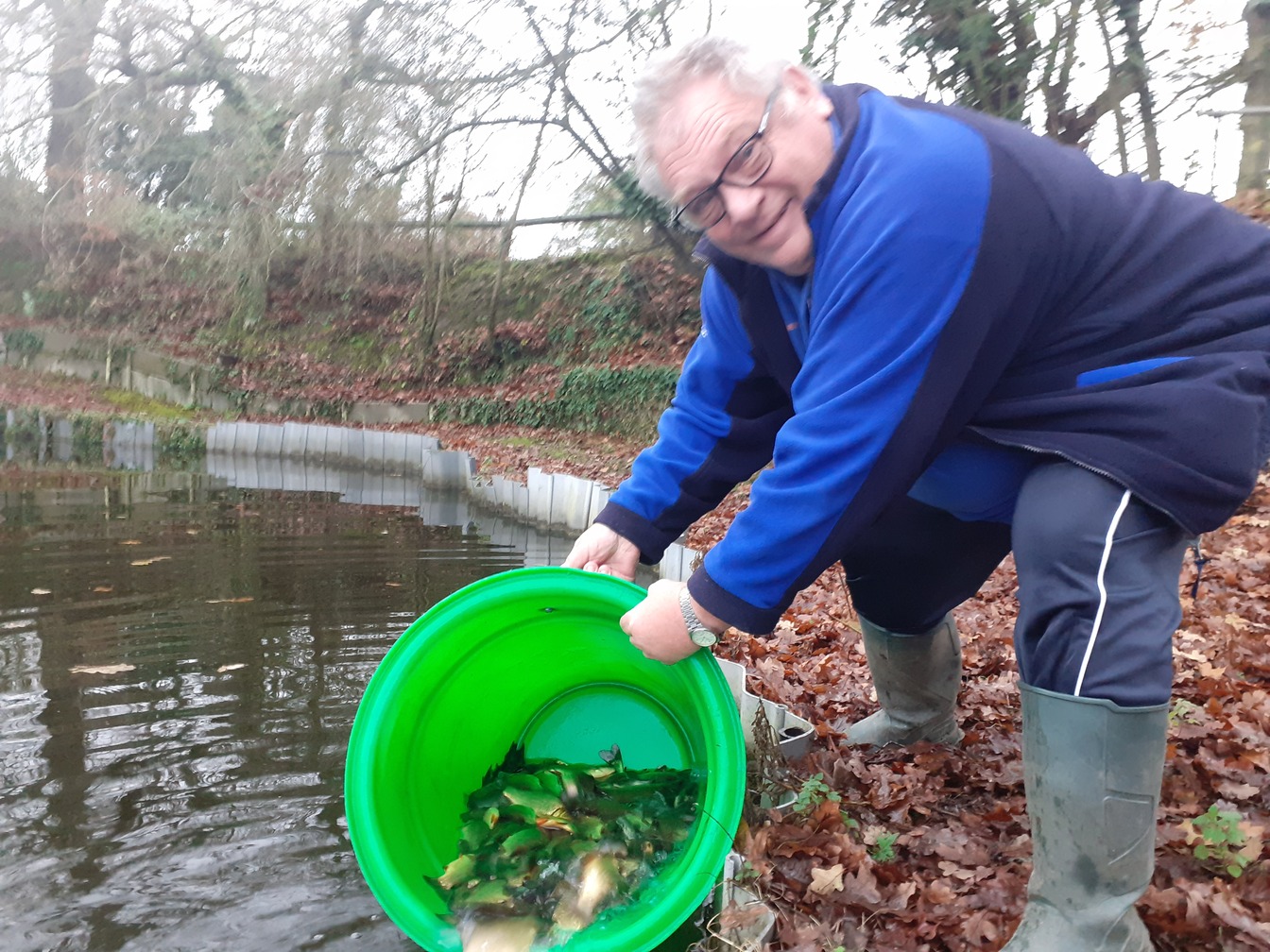 Good to see new members trying out the clubs river Wid stretch at Skeggs Farm Writtle.  The new season began warm and bright - despite the low summer water levels fish were still caught.  Chub/chublets being the main target with dace roach and the odd perch putting in an appearance.  My contribution was half a dozen fish from the weir pool this chub of around 2 lbs being the best. NB- something BIG was on for a short while but my 2.5 lb hook link with size 18 double red maggot feeder fished rig proved no match in stopping its lunge for the far banks willow roots. Next time I will try beefing up the end rig as this pool is 8’ + deep, who knows what lies beneath? Large carp and a golden orfe have been rumoured!  I will also take a hat as it proved a real suntrap.

Many thanks in advance & to bailiff Barry - who managed a few good dace to worm from the downstream swims.ry Officer

Night tickets for Barleylands and Laundry Lake have now sold out.  19 March 2021.

Here's some photo's of the netting of Falklands lake yesterday 1,000+ roach and skimmer have gone into Asheldham and 1.000+ into Thoby Wood .

As of 1st November members with night permits for Barleylands and/or Laundry Lake may fish with 3 rods at these fisheries until 31st March 2020 providing they are in possesion of an Environment Agency 3 rod licence.

BDAC members can now park in the car park / industrial units at Skeggs farm (NOT the farm yard) this gated site is open weekdays between 6.00am and 10.30pm and at weekends can be accessed via a release button.

BDAC has joined the consortium of clubs that can fish this venue and requires a member to sit on the consorium committee to represent the club. Anyone interested should email the Club Secretary ( secretary@bdac.co.uk)

The club has managed to secure the fishing on on the River Chelmer and Maldon Canal along with Maldon, Chelmsford and Colchester fishing club maps will be posted after the next committee meeting. BDAC rules apply plus the rules for the fishery listed below:

2. Anglers must not dig swims into bank.

3. No fish to be kept in captivity for longer than 6 hours and any fish showing signs of distress should be returned immediately.

4. Where a match is advertised, the stretch of water will be closed for fishing from both banks for 2 hours before and 1 hour after the match.

5. The use of live fish baits is not permitted.

6. Anglers fishing for carp and pike must use an unhooking mat.

7. Carp sacks are not to be used and carp over 5lbs will not be retained by any method, except during officially booked matches.

8. No fishing within 30 metres of any lock, nor within 15 metres of any bridge, weir, wharf, landing stage, permanent mooring or other navigational structure.

9. No fishing on that part of the waterway just above Daisy Meadow Car Park and Heybridge basin.

10. No fishing between Paper Mill road bridge and the upstream end of the towpath moorings at Paper Mill.

11. No fishing on that part of the waterway adjacent to Treasure Island at Little Baddow.

12. No fishing on that part of the waterway adjacent to the South Bank between Hall Bridge Heybridge and Heybridge basin.

13. No angler is to be inconsiderate or abusive towards other users of the Chelmer and Blackwater Navigation.

14. Anglers must not obstruct the towpath.

Please use the official BDAC car park and lock the gate after use.

Following thefts from the farm, the owners have had to install a security gate near to the top of the drive from the A113. Members must ‘phone the company named on the sign at the gate, who will remotely give access. This is applicable both going in and out, when the gate is closed. The company is AGI Holdings, 01708 688105, and members must say that they are members of this Club. Their ‘phone will be answered 24 hours, but remember that this is a 6 a.m. to 10 p.m. stretch.
The car park at Shonks Mill bridge is unaffected, just to remind members that they must link our padlock through the farmer’s padlock, not through the chain.

Following some issues with dogs causing problems on the fishery, in future "DOGS MUST BE KEPT ON A LEAD AT ALL TIMES"

NO VEHICLES  ARE ALLOWED ON THE FIELD AT HICKS FARM, ALL VEHICLES MUST BE PARKED IN THE CAR PARKS PROVIDED. ANY MEMBER WHO IGNORES THIS VENUE RULE WILL BE SUBJECT TO DISCIPLINARY ACTION.

We are looking for Fishery officers to look after our Field and Swan lakes also our Old Island and Long Lakes. Please do not ring the number in the handbook or website as Colin Bell is no longer the fishery officer.

THROUGH MISUSE, WHEN NIGHT FISHING A MAXIMUM SESSION OF 72 HOURS (or less) AND NO RETURN TO THE FISHERY FOR 48 HOURS.

We have received a complaint from the Willowmere and Chasewater Angling Club, who have a lake in the Writtle area, not too far from our water, Willow Mere. Members of BDAC are not following the directions in our handbook, but have googled Willow Mere and found the lake of Willowmere and Chasewater A.C. They have accordingly been ejected by the farmer. Please check the directions in the club handbook.

Numbers were a bit down this year possibly due to the weather. We were met with cold winds and heavy rain at the start but this didn't put the fish off as Jay had a jack first cast. The rain soon cleared to leave bright calm conditions. Not ideal but the pike were on the munch with more fish caught than last year. Everyone had a fish or two albeit mostly jacks and it looked like David Wilson would be taking the trophy thanks to the biggest fish of the session at 8lb 14oz. However last years winner Dave Twitchett managed a late fish of 8lb 8oz to add to his tally and retain his title! Herring mackerel smelt and roach all worked plus one on a lure. Once again a very enjoyable friendly match with a few quid raised for charity. Ken Brown.

The car park gate is to be kept locked at all times particularly at weekends. Please lock the car park gate when you enter and leave the fishery, to ensure only club members have access. Please read the venue rules.

Members are reminded of Byelaw 11 "Except where indicated in the Club handbook, all cars must be parked in the official car park where one is provided and all gates to fisheries to be locked after entry and exit. Under no circumstances may cars be parked on roads adjacent to fisheries."

In order to comply with the recently introduced General Data Protection Regulation (GDPR) (EU) 2016/679 which is a regulation in EU law on data protection and privacy for all individuals within the European Union, BDAC has published its Privacy Policy (see below).

Under the terms of GDPR, the club has been required to choose a lawful basis for holding personal data. In our case, we have chosen the basis of legitimate interests. This has a minimal privacy impact, such as contacting a member about their annual renewal.

The non fishery managers at Lee Valley Regional Park have decided to introduce car parking charges at a number of sites across the park in order to generate additional revenue. This is partly due to local authority councillors sitting on the management board deciding to reduce the amount their authorities have to payto run the park. under the act of parliament that set up the park in the 1960s.

Charges will be made using an ANPR camera installation in the two authority car parks (Fishers Green and Hooks Marsh) but not the anglers car parks behind the anglers padlocked gate at Stubbins Hall Lane.

With the exception of official BDAC matches (see handbook) keepnets are banned on all fisheries until further notice, due to a KHV outbreak in Essex. Please ensure landing nets, stink bags, carp mats, weigh slings etc are dried in sunlight before bringing them to club waters.

Leaving gates open WILL lose Club waters, and anyone found leaving or entering fisheries without locking our gates WILL face serious disciplinary action from the Committee.